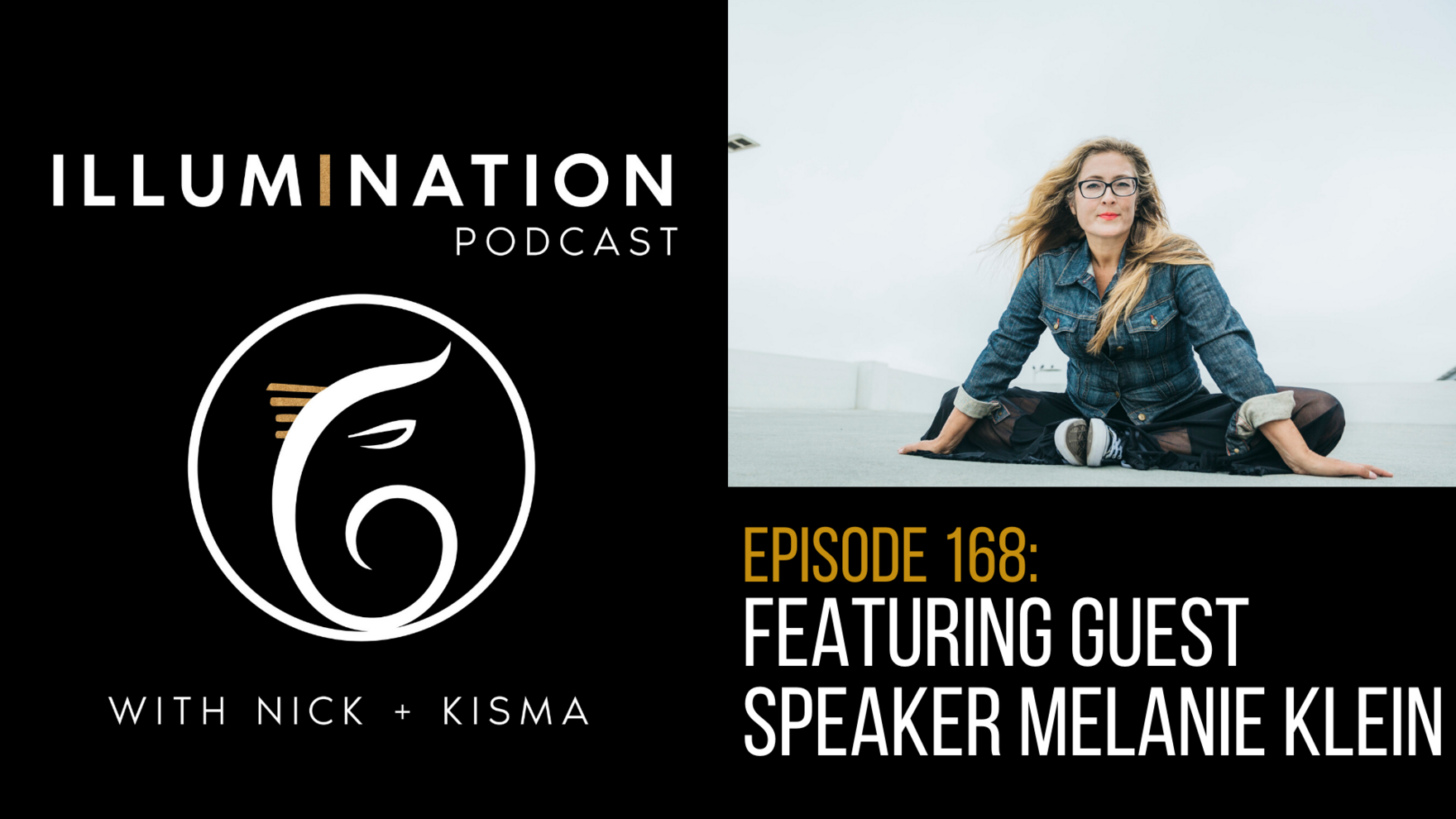 This week's episode has a special guest: Melanie Klein. A sought after empowerment coach, thought leader and influencer in the areas of body confidence, authentic empowerment and visibility. Melanie is also a successful and highly acclaimed writer, speaker and professor of sociology and women's studies. So without further ado, I am so excited for this episode with Melanie Klein.

I kind of want to give our listeners a little about story. Melanie,we met almost two years ago at an event. Melanie has this essence about her. She's very beautiful. There was something about her as a woman that was so captivating, a softness and a strength. Then I found out that you were very much involved in the yoga world… which made sense to why there was a connection!

Your yoga history, when did that start for you? Were you young? Like in college?

So I'm totally going to answer that question after I say it's funny to hear you reflect what you saw when you saw me the first time. Later in the episode we are going to talk about how we see ourselves versus how others see us. Because what you described is how I saw you..in fact, as much as people may see me as what you described or potentially grounded or empowered...

I'm still a human and I have my vulnerable parts and there are people who intimidate me and I remember seeing you and feeling a little intimidated.

The yoga question that you posed, I'd say is one half of the biggest part of my empowerment equation. In my early twenties and coming from a pretty grenola family, things like yoga or spirituality were not foreign to me at all. Especially as an artist and poet, the connection that we tap into to Source when we are creative. All of those things were part of growing up, not to mention, having a very nature-based experience as a young girl living in Germany…

Over the next few weeks my sister and I (who I was going to this class with) just kept going, and inviting others to go… this was 1996.  There were 15 to 20 people in the class, which was a lot and really weird for Kundalini yoga.

I know you've heard us talk about this, but there will be a calling, you know, whether it's intuition, whether it's a guide from the universe or God or source. I mean, my first yoga class kind of happened the same way I was living in Hong Kong. And one of my good friends said, “Hey, there's this really new yoga studio open in long Kwai Fong, let's go”.

I was so not committed, but I went to this class, it was all Indian teachers and here I am,with these beautiful Asian flexible women. I'll never forget, I think it was master, he said sit Lotus Style.

I crossed my legs and my knees are pointing to the ceiling. He looked at me in front of the whole class and say’s “what's the matter with your hips?” It was like, I don't know, you tell me. So it was like really frightening that. But the next day I remember feeling the same way. I felt different. And so I think that's when we do like we know we've just entered a practice where something has shifted and it's so important to stay with that.

Not only do I love your story because I can relate to it for so many reasons, but also it's kind of a foreshadowing of I'm sure what we'll dig into here about the work I do around making yoga accessible for everybody and making everyone feel it's for them because like you said, stepping into something that you knew was going to essentially be a game changer for you without even knowing why or how.

My question for you is about this, I think in a lot of ways in women's empowerment there's something there for guys too, that can tip over into  feminization of the man. And I'm wondering if you can talk a little bit about those dynamics and it's like, how does everybody win in that conversation in your mind?

There's a lot to be said and what you just shared, Nick. A few things I want to say about that is we have to also understand, especially in the last three or four years, we have had an another massive backlash that we're currently in. So if we're looking at the second wave of feminism or what most people know is the women's liberation movement, which also coincided with the civil rights movement and the black liberation movement. And also known as the peace movement... (listen in to get the rest of Melanie's answer to this question!)

Give our listeners just a place where they can go and find you. I mean, what I love about Melanie, what she does for herself, she does for other women and, and this essence of empowerment has so many facets to it. So what's the best way or where do you want to direct our listeners?

Melanie C. Klein, M.A., is a sought-after empowerment coach, thought leader and influencer in the areas of body confidence, authentic empowerment, and visibility. Attributing yoga and feminism as her two primary influences, Melanie has been in the business of empowering women since 1994. With over 20 years experience and notable credits including advising the Santa Monica College Feminist Majority Leadership Alliance, working closely with Global Girl Media and running the LA chapter of Women, Action and the Media; she has dedicated her passion, knowledge and coaching skillset to the empowerment of innumerable women through increasing confidence, self-esteem, worth and value.

As an empowerment coach she is committed to raising consciousness, communal collaboration and facilitating the healing of distorted body images to promote positive body relationships; thus empowering female thought leaders, entrepreneurs, renegades, executive leaders, or anyone ready to step into their greatness, to make their voices heard and take new action in the world.

She is also a successful and highly acclaimed writer, speaker, and professor of Sociology and Women’s Studies. Her areas of interest and specialty include media literacy education, body image, and the intersectional analysis of systems of power and privilege.

She is the co-editor of Yoga and Body Image: 25 Personal Stories About Beauty, Bravery + Loving Your Body (Llewellyn, 2014) with Anna Guest-Jelley, a contributor in 21st Century Yoga: Culture, Politics and Practice (Horton & Harvey, 2012), is featured in Conversations with Modern Yogis (Shroff, 2014), a featured writer in Llewellyn’s Complete Book of Mindful Living (Llewellyn, 2016), co-editor of Yoga, the Body and Embodied Social Change: An Intersectional Feminist Analysis with Dr. Beth Berila and Dr. Chelsea Jackson Roberts (Rowman and Littlefield, 2016), Yoga Rising: 30 Empowering Stories from Yoga Renegades for Every Body (Llewellyn, 2018) and the co-editor of the new forthcoming anthology, Embodied Resilience through Yoga (Llwelleyn, 2020).

She co-founded the Yoga and Body Image Coalition in 2014 and is the co-founder of The Joy Revolution. She has been practicing yoga and meditation since 1996 and currently lives in Santa Monica, CA.