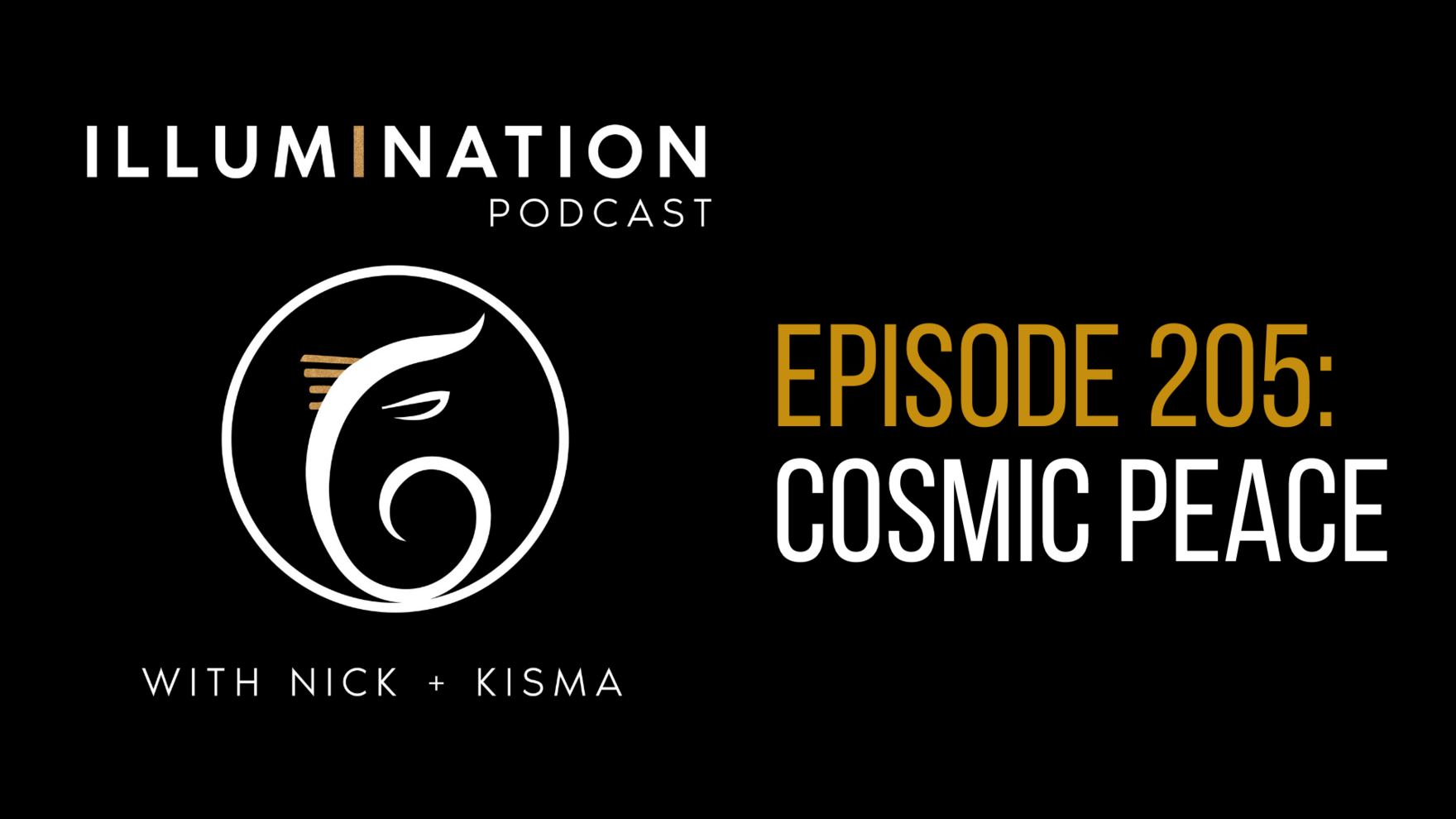 This episode is about Cosmic Peace.

Last week our episode was about how to anchor the peace within, it was practical application about choosing to turn the noise down, choosing to not get into arguments, and more.

Today we're going to raise it up into more of the cosmic nature.

And somewhere we start to get really embedded in the physical world, in the day to day, and what is often referred to in the spiritual teachings as the mundane. And once we're stuck in the mundane, it's actually difficult to find peace because the cosmic peace is when we're able to be in the world, do what we're here to do, but elevate ourselves out of what is often referred to as the pairs of opposites.

Cosmic peace is something very different by nature.

To have cosmic peace, to have peace in anything, we need a certain amount of strength, meaning a strength of intellect. We need to be resolved in our will to choose this.

So when you're able to look at your weaknesses, and do so lovingly that's when the strength follows, the strength will not come if the weaknesses are not observed and made aware of first. You have to see what isn't working guys. You have to notice in yourself what isn't serving you and be willing to say “I'm sliding that over so that I can slide something in”.

The awareness of what's not working is the first step to cosmic peace.

6:05 Wake Up Tp The Games You Are Playing

To be aware and to be willing to examine is a great exercise. Because until you can see and observe yourself in what things are doing to your energetic field, to your mindset, to your body, you won't be inspired to change it.

So basically, wake up to the games that you're playing.

Wake up to the games you're playing into the habitual responses and reactions. Because so often when we do react a certain way, when we have the sense of negativity or the trigger or the tip or whatever you want to call it, it has become habitual. It's just like something gets triggered. And that's what you do. It's what you know that you do. It's where your subconscious mind tries to take you. You've got to see it.

You've got to know that it is part of yourself in this 3D world in order to elevate yourself into the spiritual world, because it's a spiritual mindset. Spirituality is an attitude. And to have that attitude, we've got to slide out the things that are affecting us.

To me, a true spiritual essence, and ability to have cosmic peace is to be able to govern yourself as you are at any moment in any time. So if you need something to be able to find peace, it isn't a true peace that you have access to, in my humble opinion.

The cosmic peace is being able to understand who you really are, which is this Self, it's to understand that the Universal substance is running through you and it's around you. The God spark is in you. All of that exists. You don't need a drug or a fast breathing process or whatever to bring it out. It exists. It's the awareness. And it's the capacity that allows you a greater feeling of connection because you're not disconnected.

The cosmic peace is finding and realizing that first, at least having that sense of “Whoa, maybe it is there. Maybe it is all inside. And I just need to move the external stuff, not rely on the external stuff, rise above these pairs of opposites of the world and go within and find it there.”

Something that you do that I think maybe a lot of people don't, or don't understand that you do is you have built the energetic capacity to have that and to hold that. And this is a really important part of the path. Your energy matters. You know, if you think about yourself as a container and you want to have this cosmic peace, well, certainly that's not going to happen when you're being pushed and pulled by the world.

12:42 Everything You Need Resides Within You

I still come back to seeking the path and having the awareness that there is an existence within you.

Everyone, just pause and understand that everything you need resides within you to have success or failure.

20:28 Essence Of Calm And Certainty

Start by being willing to observe yourself, avoid judging yourself when you observe, but just notice where you go into tipping points, where you get triggered, where those weaknesses start brewing. And  then embody and receive this essence of calm and certainty that is coming from a way higher spiritual being than you could ever imagine. Just start there, with the awareness and trying to move that heavy stuff out of the way and embodying the higher. And you'll be surprised how, as you repeat it, it becomes easier and easier, better and better.

Thanks so much Melanie!